Lentils are friendly – the Miss Congeniality of the bean world.

In my post about Quick Minestrone Soup, I mention that my dad used to make us huge pots of beefy vegetable soup. My parents pretty much shared the cooking duties as I grew up, but soup was my father’s department. The soup of my childhood was cheap, filling and humble. It always had a beefy broth, achieved by boiling the cheapest of soup bones. The rest of the ingredients list was pretty much vegetables, some tomato paste and seasoning. And it was a huge pot – we could eat only soup and bread for supper – it was that filling. There was also soup left for lunch the next day. And for in-between snacks – I had a growing teenage brother who loved soup!

Doing my bit for the environment

You still get those cheap packs of soup meat for sale in South Africa in winter, but my family and I have moved on to eating more sustainably. We try to eat more vegetables and to only buy chicken or fish when we do buy animal protein. So making a beefy broth is out and sticking with vegetables is in! So now we have Vegetarian Lentil Soup. I did still want to have the soup of my childhood though, so my thoughts went to lentils. My dad sometimes added dried lentils or beans to his soups, so I decided to give it a try and I haven’t looked back! Not having to cook a tough cut of beef till it is tender saves a lot of time. The lentils add a lot of protein and I can honestly say I don’t miss the beef.

A word on vegetables

In soups like minestrone or chicken soup, the vegetables you add are pretty much seasonal veggies that you have in your fridge at the time. You can buy chopped soup veggies at most supermarkets nowadays which is very convenient and easy. My dad’s soup is really retro in this respect though. He only used the prepacked soup vegetable packs that have been sold in South African supermarkets since the advent of such supermarkets. Yes, those ones with a potato, two carrots, a turnip and some leeks, celery and parsley. These soup packs cost all of R20 and are absolutely essential to the soup. Old fashioned and boring? Possibly, but the combination of those veggies creates the perfect consistency and flavour. You’ll have to read the recipe to find the secret of how to turn those retro soup veggies into a thick Vegetarian Lentil Soup! 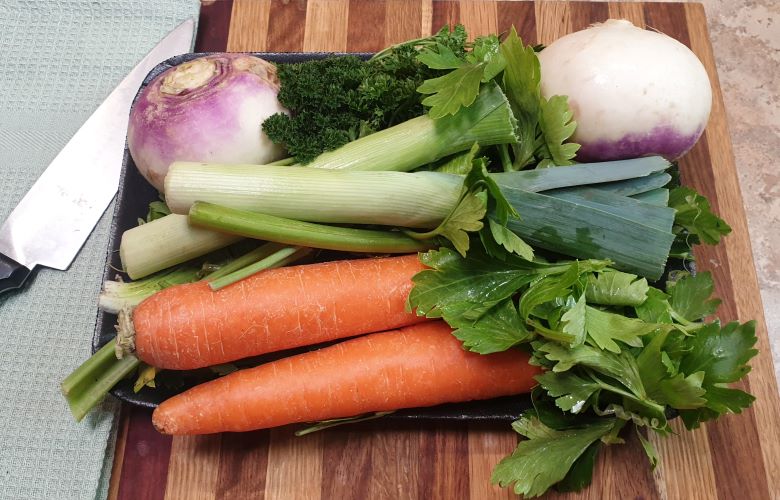 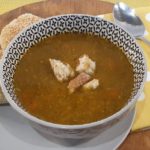 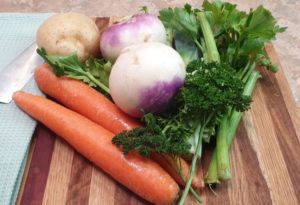