A little science. A little magic. A little chicken soup.

I was sure it would be easy to find a quote for this post. Chicken soup is a much-talked-about dish after all. But the quotes I found didn’t say what I felt about chicken soup until I saw this one from Diane Duane. She might have been talking about one of her science fiction novels, but chicken soup is just that. A little bit of (food) science. A little bit of magic! Mothers the world over will swear by the magic of chicken soup. It is said to have everything you need to help you recover from a bad cold or a bout of flu. But the best part is that it is delicious, easy to make and affordable! So if you’re feeling sniffy, go find a saucepan, a chicken breast or two and some veggies and let’s get to work on this wonder cure. Budget Chicken Soup!

A little goes a long way

There are thousands of chicken soup recipes on the internet. The ingredients that people add can be quite amazing. I have seen Tumeric, garlic, miso, pearl couscous, black beans, Thai green curry and many more. All of these recipes look super tasty, but let’s face it: when it’s cold and you need soup, you need to get on with it. This Budget Chicken Soup recipe only uses some chicken breasts, stock, veggies, basic dried herbs and some thickener. But it will be as good as any of the others on Pinterest. The chicken is chopped into cubes and you add a lot of veggies, so the soup stretches to easily eight portions. You can even freeze some for an emergency. Yes, I do have soup emergencies. When I’m cold and hungry – roughly from May to mid-August!

Of course, once you have mastered this basic recipe, you can add any spices or ingredients of your choice. The most commonly added ingredient is noodles. Definitely part of any good soup and it doesn’t add much to the cost. I have also seen recipes where they add dumplings, pearl barley or even tortilla chips! My next chicken soup is definitely having a Mexican flavour! You can also double up on flavour and taste by adding some cream, sour cream or yoghurt. The options are endless and the soup is bound to fix whatever might have been wrong, from hunger to heartbreak. It is really a kind of magic! 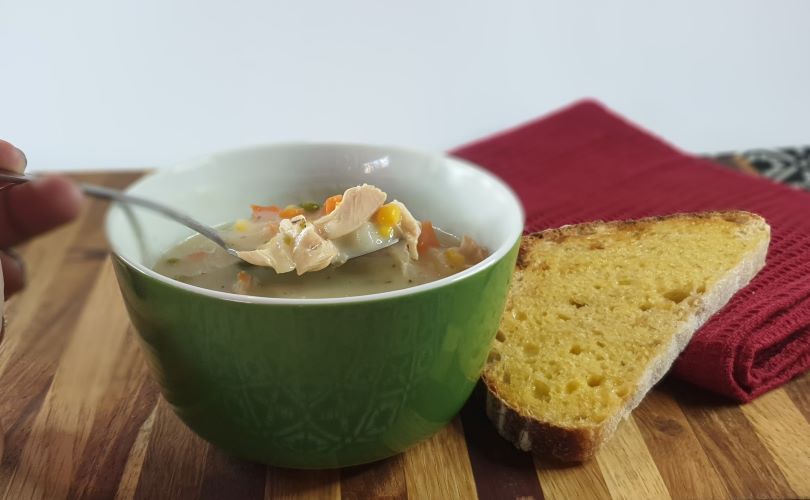