In the cookie of life, friends are the chocolate chips.

Biscotti is one of those trendy things for which there are literally hundreds of recipes on the internet. I like the idea of biscotti because it’s similar to South African rusks, but is a lot less work. As I mentioned in my Chocolate Crunchie post, many South African cookie and rusk recipes make dozens of cookies and I then see it as my ultimate task in life to finish all of them! My biscotti recipe makes about 30 – 40 biscuits and they are cute and small – which I believe allows me to have more of them! Reading up on biscotti on the internet taught me that these traditional twice-baked almond cookies are also called cantucci. But Pinterest has biscotti recipes with all sorts of things added! The first recipe I tried was Hot Cross Bun Biscotti! And that led to this Choc Chip Cranberry Biscotti recipe. 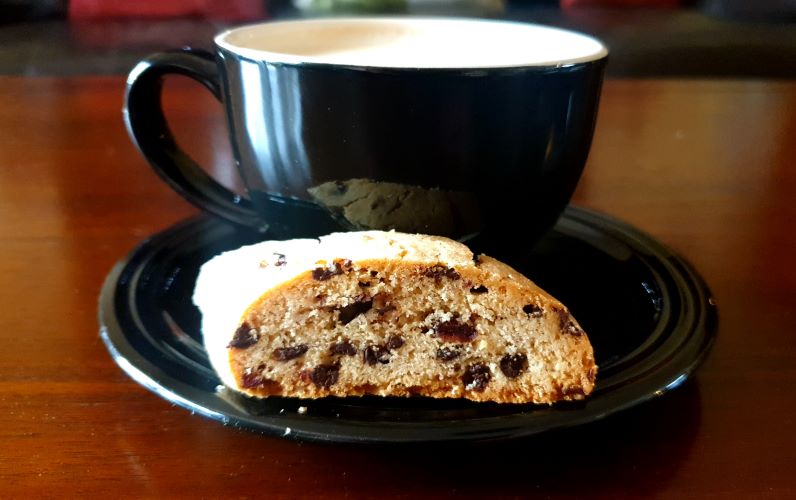 I have used Drizzle & Drip‘s Hot Cross Bun Biscotti recipe as the base of my recipe. Sam Linsell, the author, uses vegetable oil instead of butter (I always have vegetable oil in the cupboard). And it is very easy to exchange the dried fruit, nuts and spices for some other combinations. Mini dark chocolate chips and cranberries (I hate raisins) have resulted in this Choc Chip Cranberry Biscotti recipe. Or as my children are now calling it: Emotional Support Biscotti. Exchanging the choc chips for pistachios will result in perfectly classic Cranberry & Pistachio Biscotti, but my husband can’t eat tree nuts, so chocolate it is. The original recipe has mixed spice and cinnamon, which I decided to replace with instant coffee granules and it works beautifully!

As I mentioned, biscotti is really a lot less work than baking rusks. A quick mix of ingredients, a minute or two of kneading and then some (enjoyable) shaping and it’s done! You can shape the biscotti “logs” in the size you want, meaning you can have dainty biscotti or nice chunky ones. I’ll admit I really enjoy shaping the dough logs – I suppose as an ex preschool teacher it brings back memories of Play-dough Fridays! Though the biscotti are twice-baked, it doesn’t take long to dry out, saving time and electricity.   If you have never tried baking biscotti, I can recommend it for its therapeutic effects, as well as that feel-good hit when you dunk it into your coffee and take a bite! 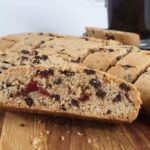