One cannot think well, love well, sleep well, if one has not dined well.

To say South Africans get obsessed with Milk Tart could be a bit of an understatement. My friend even has a recipe book with only milk tart recipes! Milk tart can be found in most supermarkets, bakeries and home industries. Many South African restaurants have milk tart derivative desserts on their menu’s. We are also lucky in that milk tart flavoured milkshakes and liqueurs are found everywhere. To put it simply: it’s a classic and it’s here to stay! And what’s not to like? It’s sweet and custardy and spiced with cinnamon. It’s one of those comfort foods that bring back memories of grandmothers’ kitchens and family gatherings. In fact, my mother used to make milk tart filling if we had the flu or needed something soothing for a sore throat.

Is it all in the crust?

As with many traditional foods, there are numerous recipes for milk tart, and everybody swears by theirs. Most are made with shortcrust pastry, but some people opt for the easier option of a biscuit base (crushed biscuits mixed with melted butter and pressed into a pie dish). As with many of the recipes in my mom’s scrapbook, the recipe I grew up with doesn’t use either of these. It calls for a crust that is more like a batter and is spread into the pie dishes using the back of a spoon. The cool part about this pie crust is that it doesn’t need pre-baking, and can be used for savoury dishes like steak & kidney pie if you left out the sugar.

Or is it that milky filling?

The filling for a milk tart is basically milk and sugar, thickened with flour and enriched with eggs, butter and vanilla. No cinnamon goes into the filling but is rather sprinkled on top. Again my mother’s recipe deviates from this as it calls for condensed milk instead. But I believe that this is what makes this recipe delicious. The combination of the crust and condensed milk filling also makes it possible to serve this milk tart cold. Of course, condensed milk comes in tins and using one tin creates three big tarts! So be prepared to share the love and give your extra milk tarts to friends or relatives. Then again, when those beauties come out of the oven, you might decide to keep them all to yourself!! 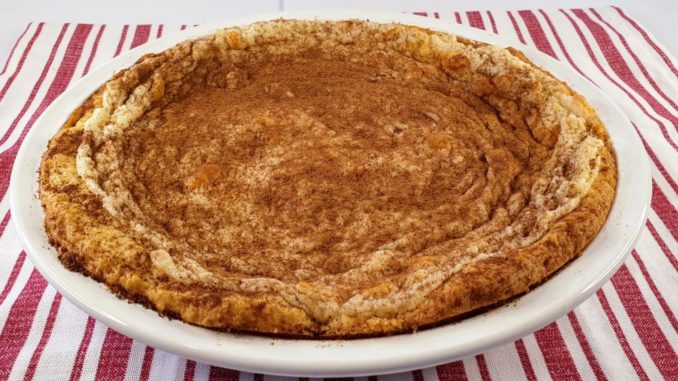 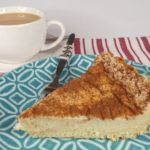