The greatest dishes are very simple.

I will admit to finding falafel in a desperate search when faced with being invited to a bring-and-share at the house of newly-made vegetarian friends. I will admit to being sceptical as to whether balls made from chickpeas could be satisfying. After tasting them though, I do not have to admit to anything else, as I instantly fell in love and have shown the humble falafel all due respect ever since! Okay, I think I might also have to admit to always eating way too many falafels when I make them. I have considered typing here that they make excellent lunch box fillers or lean protein snacks, but to be honest they never make it to the fridge for later.

Not convinced yet? They are healthy (except in large quantities  – see above), crispy on the outside and soft and spicy on the inside. They are vegetarian and vegan and inexpensive to make. Let me go all out and say they feed not only your hunger but your soul! I found a haiku online from the Amsterdam Falafel shop, which proves I am not the only one singing odes to falafel:

And wrapped in Hell Yeah

My excellent falafel recipe comes from Kelly Senyei of Just a Taste. It is really simple to make and she has put in an effort to cut fat out of the recipe as far as possible. She does sauté them in olive oil, but she also has a Crispy Homemade Baked Falafel recipe. I have always stuck to the original recipe without regretting it. Okay, last confession: I have not tried to make the Tahini sauce that goes with the recipe. If I need a sauce, I have used tzatziki or sweet chili sauce. 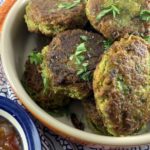