“If you wish to make an apple pie from scratch, you must first invent the universe.”

I have this recipe for what I call Apple Cake. I got the recipe from my mother who wrote it in her recipe scrapbook somewhere in the ’60s or ’70s. She often used to make Apple Cake in round pie dishes for visitors and serve it as you would a pie. It is not a straightforward apple pie though, as it has a more cake-like texture and there’s no pastry involved. We also had Apple Cake for dessert after Sunday lunch, on hey-days and holidays. And the best part? It was delicious, super easy to make and budget-friendly.

For my eldest daughter’s third birthday party I decided to make Apple Cake for the parents of her little friends. I made a double batch in a large rectangular dish as I had quite a few mouths to feed. I became “the mom who can bake”! Since then I have shared this recipe with so many people that I have lost count. In fact, I get asked for it so often that I have a copy saved on my phone for easy sharing!

I have submitted this recipe for my younger daughter’s school recipe book, we have used it for school projects (make a video of you cooking something in Afrikaans) and I have turned it into cupcake sized tarts when we needed something special for a Ladies Tea. I have been asked to make “that Apple thing of yours” for many a bring-and-share party and have had complaints from people when they hear Apple Cake was on offer at a gathering they didn’t attend! Apple Cake is the king of all my recipes and it’s not even mine! How I wish I knew the very talented creator of my recipe to thank her… and to look at what other recipes she has to offer!

“So can we have that recipe now?” I can hear you ask. Sure, I have it here on my laptop, so it will only take a moment to cut and paste! 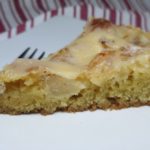